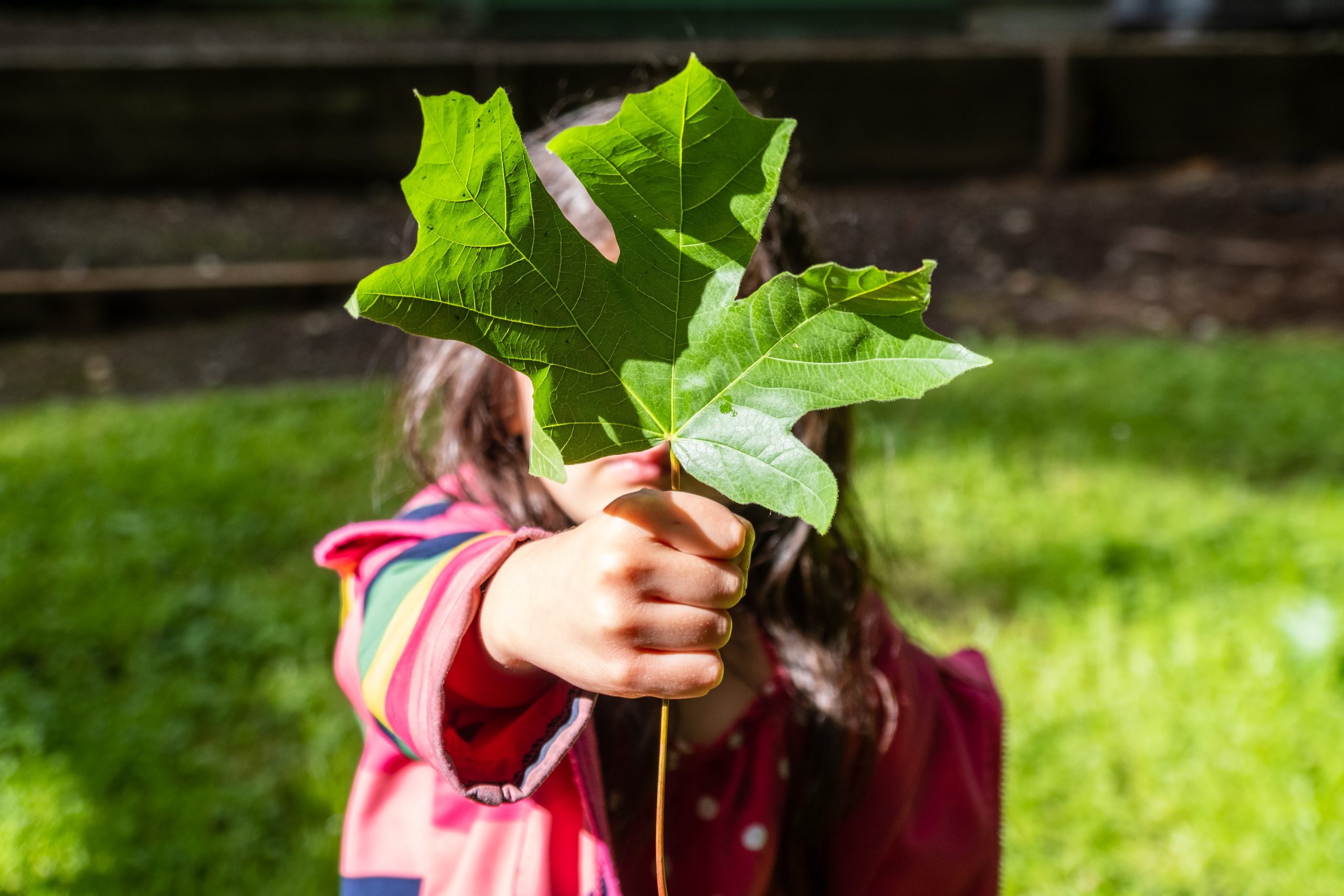 Whose emissions are those?

L’Età del Carbonio is a monthly series exploring rapidly evolving climate transition scenarios and emerging carbon issues in the world of politics, business and finance. L’Età del Carbonio is produced by Carbonsink for EticaNews and is published monthly with the ET Climate 2022 newsletter.

June 2022 – Climate change has become a priority for companies around the world. More than 90 per cent of global GDP is now covered by a net zero emissions target of some kind. According to S&P Global, one fifth of the world’s 2,000 largest listed companies have a net zero goal by 2050. In Italy, more and more companies are defining climate strategies to reduce their emissions and climate impact. At the end of 2019, only two Italian companies had a reduction target approved by the Science Based Target initiative. By June 2022, this number had risen to 35.

Understanding one’s carbon footprint is indispensable for setting ambitious reduction targets and designing an effective plan to achieve them. For this reason, the first step in a robust climate strategy is to accurately measure one’s greenhouse gas emissions.

This calculation is aided by the Ghg Protocol, an international standard that allows transparent reporting of emissions and ensures comparability between emissions from different companies and years. 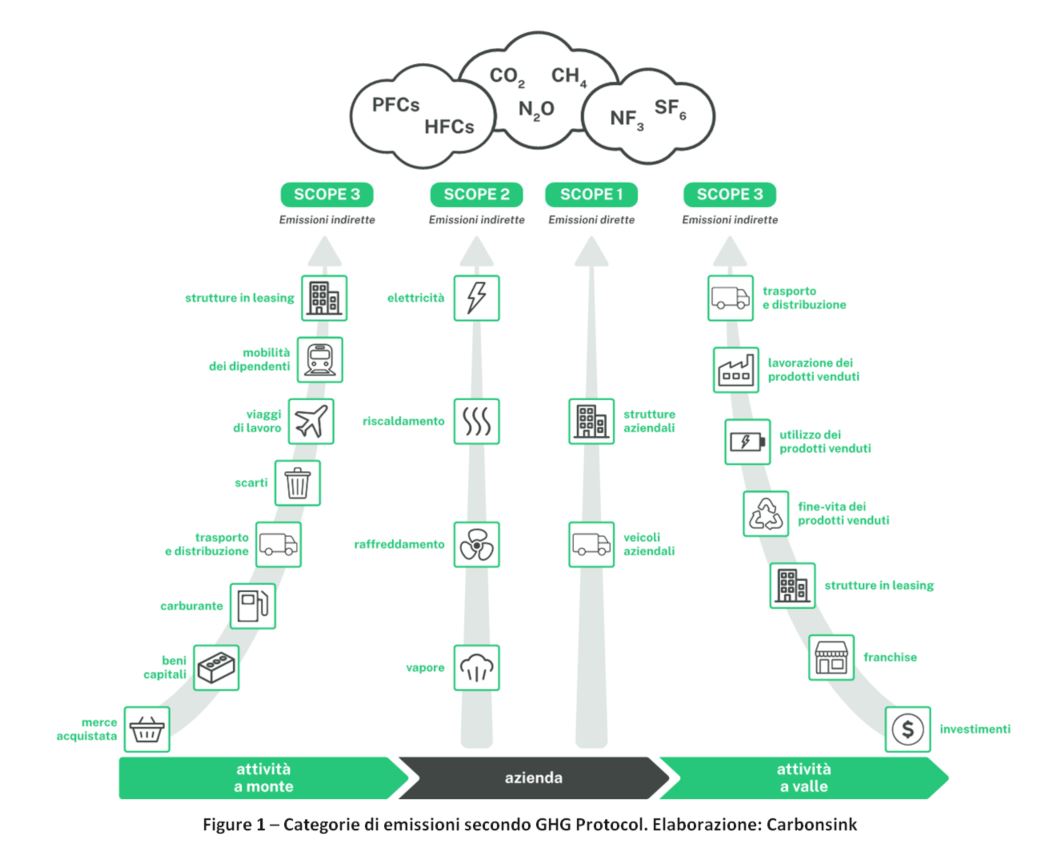 According to CDP (former Carbon Disclosure Project), Scope 3 emissions from supply chains are worth on average 11 times the operational Scope 1 and 2 emissions. And this number is steadily increasing year after year. Given the increasing accuracy of reporting, the increase is an indicator of how much the estimate is still by default: actual Scope 3 emissions are probably even higher. 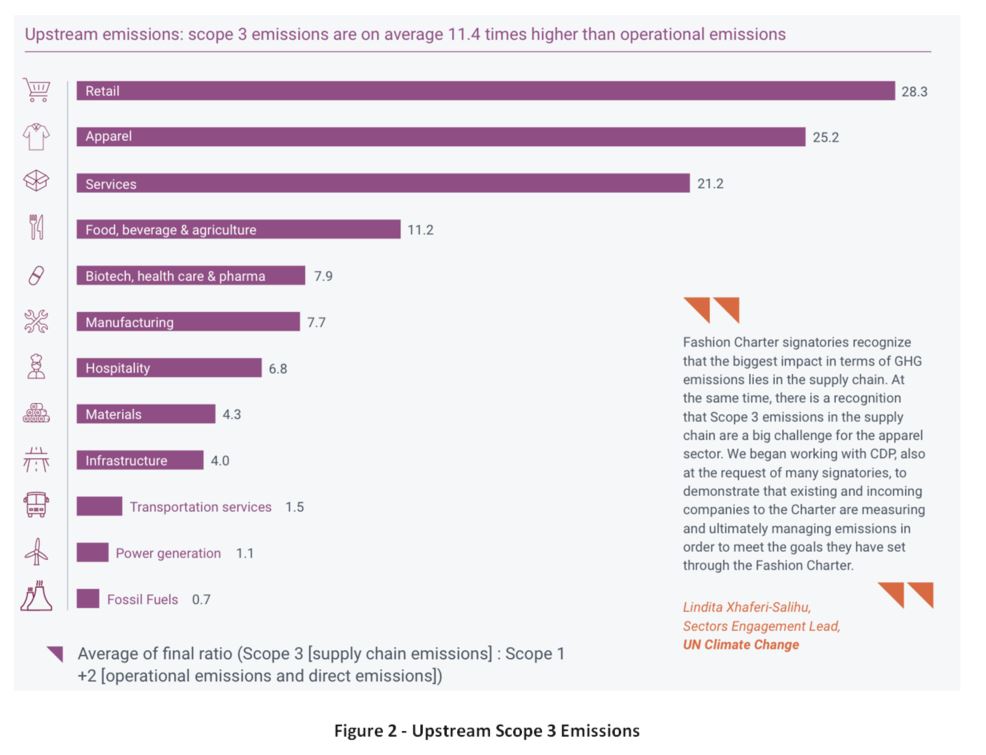 Within the sample, there are huge differences between sectors. Apparel or retail have ratios of operational emissions to emissions from supply chains in excess of 25x, while emission-intensive sectors such as power generation have much lower ratios. On the other hand, the latter will have very high downstream Scope 3 emissions, mainly due to product use and related emissions.

A separate discussion should be made for the financial sector. As reported in the CDP Financial Services Disclosure Report 2020, among the financial institutions that report their emissions via the CDP questionnaire, only 25 per cent also publish information on financed emissions, which, however, are the most relevant for the sector.

Financed emissions are emissions generated indirectly through loans, investments and insurance underwriting. According to the Ghg Protocol, these are classified as Scope 3 Category 15 – Investment emissions. What the study shows is that financed emissions are more than 700 times the direct emissions. There is therefore still a largely unconsidered impact of the financial sector, especially considering that almost half of the financial institutions surveyed do not conduct analyses on the climate impact of their portfolios.

Alongside these aspects, which highlight the importance of an increasingly comprehensive and transparent measurement of emissions along the entire value chain, is the issue of double counting and related reductions.

If one extends emissions reporting to the entire value chain, as required by standards such as the Ghg Protocol, one finds oneself in a situation whereby often the same physical emissions of CO2 and other greenhouse gases are reported in two or more inventories.

There are some cases in which the possibility of double counting is more concrete: the case of investments is the most striking, since every issue financed is necessarily an issue (direct or indirect) of some other company. But the Scope 3 issues of Category 11 – Use of products sold also lend themselves well to cases of double counting. In particular for the energy and fossil fuel production sectors, but also for manufacturing sectors such as the automobile industry.

Double counting does not present any dilemma at the level of single company analysis. But when several companies, from even different sectors, are considered together, can it become a problem?

One example is the case of Italy’s national versus corporate emissions. Research commissioned by the European Parliament on the state of climate action in Italy reports that our country emitted 427 MtCO2e in 2019. The cumulated Scope 1, 2 and 3 emissions of the top 100 Italian companies by capitalisation amount to 1271 MtCO2e: a value three times larger. This can be partly explained by considering that Italian companies also do business abroad, but also by assuming double counting of Scope 3 emissions among different Italian companies. Just think of a company that sells fuel and the companies that use it: the former will have consumption in its Scope 3 Category 11 emissions – Use of products sold, while the latter in its direct Scope 1 emissions.

To date, several practices exist for the management of double counting. For example, the allocation of emissions among supply chain actors in proportion to the value added by each.

The Eu Technical Expert Group on Sustainable Finance, however, does not recommend any management of double counting. Indeed, the experts consider that the amount of total emissions can be regarded as a proxy, albeit an imperfect one, for the financial risks of climate change. It does not matter if they are double-counted. It follows that, for investors using climate benchmark indices, the goal of risk reduction should be pursued even by allowing for possible cases of double counting between inventories of different companies.

Double counting, in short, is not a real problem. At least not as much as the current gap in inventory reporting. We are still a long way from complete and transparent reporting. In Italy, for example, among the most liquid companies on the stock market, less than 1 in 10 report all Scope 3 categories relevant to their sector. The priority therefore remains to accelerate the process of mapping, measuring and reporting on emissions, including Scope 3, without fear of double counting.

So, whose emissions are these? By definition, Scope 3 is someone else’s emissions, but every company must commit to reducing its climate impact along the entire value chain.